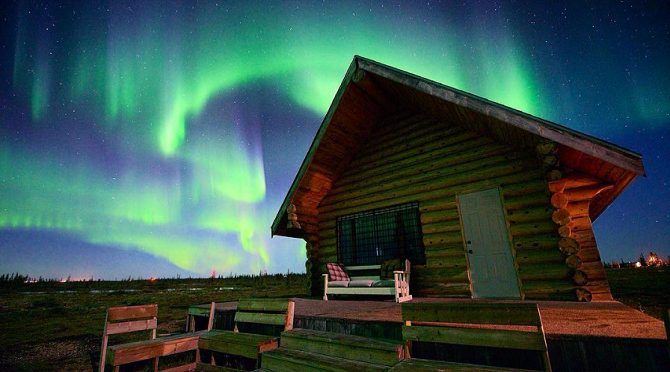 The sky glows pink as my mother and I disembark from the train in Churchill, Manitoba, ready to discover the northern lights. We’d spent the night rocking in our sleeper cars through boreal forest and taiga and the sun is now rising over Hudson Bay, casting a rosy hue over the town and its surrounding tundra.

In the train station, built in 1929, we learn about the area’s history and ecology in the Parks Canada museum. I climb inside the replica of an Omaskekow Cree family’s summer lodge, and we peer at ornate metal shoe buckles excavated from York Factory National Historic Site, a 17th-century Hudson Bay Company post located 200 kilometres south of town, near Wapusk National Park. Closer to Churchill, the massive Prince of Wales’ Fort was constructed over a 40-year period in the 1700s and hosted early sky-gazers. This winter, the fort will again host aurora-gazing adventurers when Frontiers North and RAW: almond open their pop-up dining experiences for a couple of nights.

It’s still early and there’s plenty to do around Churchill while the sun is out. Once we get settled at the Tundra Inn, where I drool over a gorgeous pair of black seal-skin mukluks in the lobby, we set out to explore.

At the Itsanitaq Museum, we admire hundreds of Inuit carvings made of whale bone, soapstone, walrus tusk and other materials. In the gift shop’s well-stocked book section, I learn about the ancient Inuit belief that the northern lights are the souls of ancestors playing ball with the skull of a walrus.

In the nearby Town Centre Complex, we take in more Inuit art in the form of vibrant tapestries depicting traditional legends and daily life. Made by women in Baker Lake, Northwest Territories in the 1970s, with materials provided by the government, this collection is the largest of its kind. 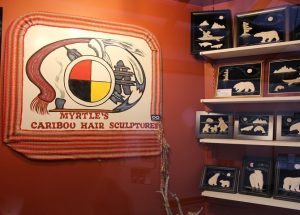 In the Bayport Plaza, a couple of streets over, we take in the window display of Métis elder Myrtle deMeulles’s own unique interpretation of the craft and keep ourselves informed by checking out the weekly report on polar bear activities posted outside the Manitoba Conservation office.

In deep winter, Hudson Bay is frozen, allowing the bears to venture away from the coast and clarifying the skies. “There’s not a lot of moisture coming off the bay so we have a lot of clear nights,” explains local guide and photographer Alex de Vries. Churchill is also located directly below a magnetic belt comprised of energy-charged particles which allows for some astonishing showings of the northern lights especially between January and March.

Alex and Natural Habitat Adventures as well as other tour companies including the Aurora Domes and North Star Tours take aurora aficionados to different locations including Natural Habitat’s Aurora Pod, a greenhouse-like structure heated with a pellet stove, and the Aurora Domes building. While you can stay indoors, observing the sky through the ceiling, if you’re looking to get that once-in-a-lifetime shot, “you’ll have to bite the bullet and brave the frigid cold,” says Alex.

By now we’re getting hungry, and we take stock of our eating options, fewer during the quiet winter. Leave any negative opinions of hospital food at home: here, the hospital cafeteria – also located in the Town Centre Complex – is popular for its views of Hudson Bay and made-from-scratch options. The other choice is the Seaport Hotel where the Arctic Char is cooked to perfection. 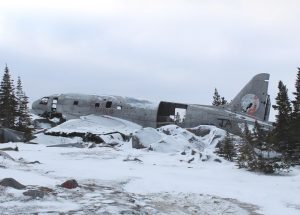 The next day we climb aboard a North Star tour bus to take in the surrounding area. We visit the controversially closed port and follow some of the same roads taken during their night-time aurora tour, driving along the rocky shore of Hudson Bay. We stop to grab a photo of a red fox, a couple hundred pictures of polar bears, and to view the wreckage of Miss Piggy, a plane that crashed in 1979, and end up at the Churchill Northern Studies Centre.

Here, the truly devoted can opt for six-day learning vacations about the aurora borealis and life in the sub-arctic. We stop briefly, long enough to gaze at the undersea creatures in the Hudson Bay aquarium, and climb the spiral staircase into the aurora-viewing dome. Looking west, I see the rocket launcher, left over from the site’s former use as the 1950’s-era Churchill Rocket Research Range when scientists launched over 3,500 rockets to study the upper atmosphere.

It isn’t fully dark yet, and the sky is overcast, but in the distance the bright pink glow of the setting sun spreads over the horizon, and I can imagine how the aurora will work its magic. “Even though it’s happening a couple hundred kilometres above you,” Alex de Vries says later that night, at a showing of his photographs at Discover Gallery. “Sometimes you feel like you can reach out and touch it.” 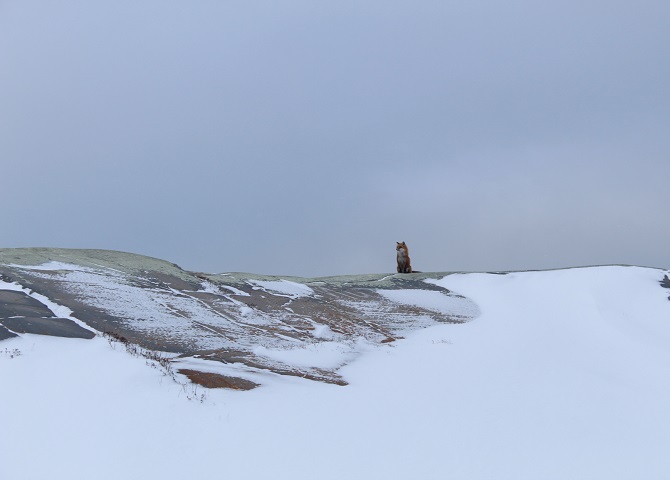 One thought on “Churchill, Manitoba: Aurora and Art in the Sub-Arctic”