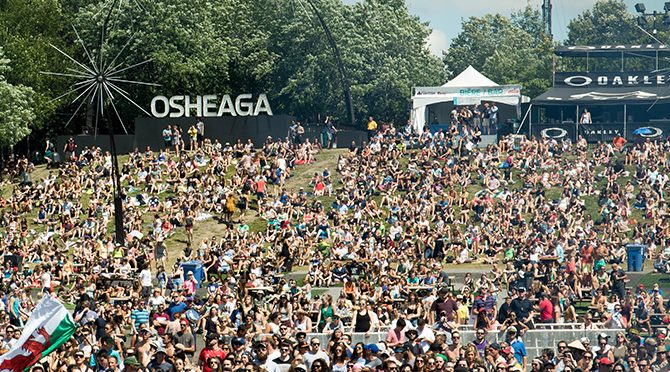 Summer in Montreal is all about music. From Picnik Electronic’s weekly raves, to the drum circles of Tam-Tams on Sundays, there is a surplus of live music experiences and festivals to be had. These Montreal events all come to a crescendo in the form of Osheaga on the last weekend in July.

Thousands make the pilgrimage to Montreal, but few know how to do Osheaga like a pro.This is where we, Ana and Michelle, come in. We have been travelling across VIA Rail’s network in search of the best Canada has to offer and can arm you with tips to make the most of your pass.

No tent zone: a festival in a world-class city

For the past ten years, Parc Jean-Drapeau in Montreal has been home to the east coast’s most prolific music event. Where other music festivals are held in obscure country venues, one of the best things about Osheaga is that you can arrive by public transport and spend your off-time enjoying Montreal’s many food and drink destinations. The same can’t be said for the deserts of Palm Springs or the bush surrounding the Pemberton Valley. Make the most of this comfortably urban situation by fuelling up on brunch before the day’s lineup.

Luckily, Michelle minored in eating out during her studies at McGill, and has a few recommendations (which we’ll be revisiting over the weekend!). For omelettes, she recommends Chez Jose. Bagels Etc stays true to its name but is also notable for its challah bread options. If you’re looking for an Instagram-friendly meal, you can’t miss the bacon-avocado-brie eggs benny at Le Vieux-Velo. Another option is to just feed your soul with music.

Beyond the Headliners: Canadian acts to watch

The headliners this year are huge, widely appealing acts: Radiohead, Lana Del Rey, The Red Hot Chilli Peppers. This level of star power is sure to bring in the crowds, but the real music magic happens when exploring smaller acts. Many of these artists are Canadian, curated by the producers (evenko) to bring the best national talent to Osheaga’s stages. The two acts that we’re most excited to share are hometown heroes that are on their way to the big leagues.

On Saturday you can catch a set from Jahkoy, a rapper from Toronto who is being likened to artists like The Weeknd. With a ton of media attention (check out his profile on Complex) following his breakout hit Still in Love (over 3 million views on Spotify) he signed to Def Jam and has been working on his debut album since. No word from Toronto City Hall on what is in the water over there.

If you’re looking for a show that will bring you to your feet regardless of your dancing abilities, Busty and the Bass is a must. This Montreal-based act is a 9-man operation, with brass, guitars, vocals, drums and keys coming together to form an infectious sound described as electrosoul/hip-hop. A favourite among Canadian university crowds for their energy-packed show (CBC Music & TD Rock Your Campus 2014 winners), you’ll want to brush up on their newest album, Lift, before hitting up this act.

Here are a few other acts at the top of our list: Best Coast (indie-rock duo with a very California sound), the Strumbellas (indie group from Hamilton, ON), the Barr Brothers (Montreal-based rock band with some serious guitar chops) and The Underachievers (a pair of rappers from Brooklyn).

We’ll be sharing some video adventures of our time at Osheaga on this blog over the weekend, so bookmark the page and stay tuned!

A weekend at this music festival provides a full three days to appreciate the winning combo of great food and live music. If you know of other must-see acts or food spots, let us know in the comments and we’ll try to catch them over the weekend!

We’ll be back soon with more recommendations from our trip along VIA Rail’s tracks. Follow our adventure on Instagram @anamarcelopez and @mich_yu.